A few weekends ago, I completed the Buzzard’s Bay Sprint Triathlon! This tri consisted of a 1/3 mile swim, 14.7 mile bike ride, and 3.1 mile run. My official time was 1:34:08, so my splits were almost exactly the same as the ones from the tri I did last year, but I felt so much stronger during this race! I definitely met my goals of really taking in every moment, enjoying the race, and not going out too fast.

The ocean swim was a little tough because it was pretty windy so there were a bunch of choppy waves. Luckily, I’m a confident swimmer, so I just went for it and finished in 10:43. 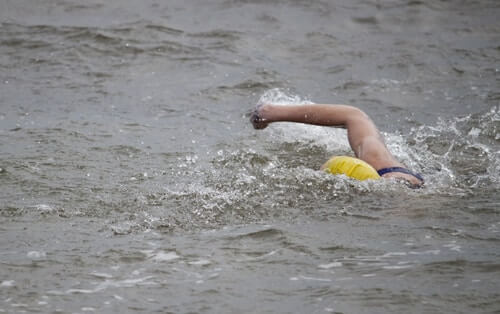 I usually swim sub-25 minute miles during practice, so this was actually a little on the slow side for me, but then again it’s hard to compare pool and open water swims. Along with the waves and chilly water (most people had on wetsuits, but I just toughed it out), the shore conditions also slowed us all down a bit because the beach was really rocky! 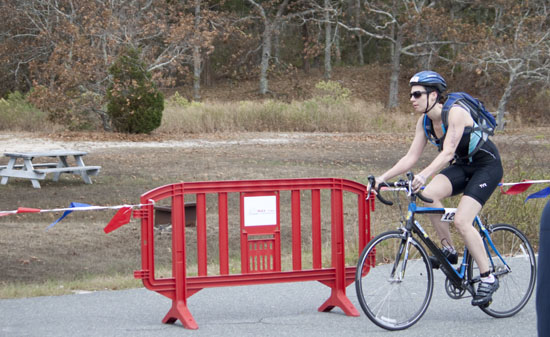 Next up was the bike section. The course was beautiful and although it was still a little windy, there were only a couple of hills and most of the course was pretty flat. 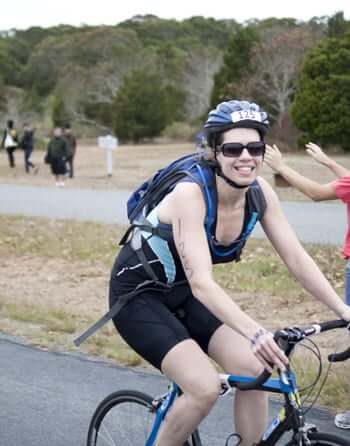 Since I’m a little uncoordinated, I’ve begun wearing a camelback when I ride, and I love it – no more fears of dropping my water bottles! I did much better on my passing this year too and averaged 17 miles per hour. 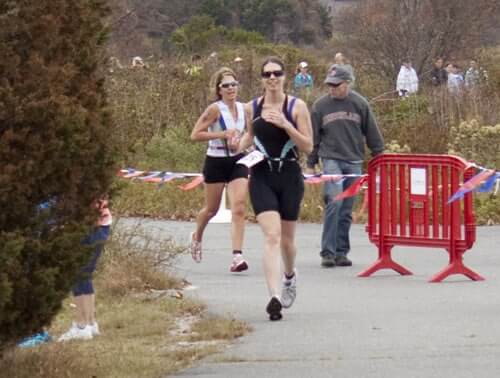 I felt nice and strong during the 5K run and even felt like I could have kept going! This was a huge contrast to my last tri so I was really happy about it. My feet were a little numb/cold during the first mile, but they warmed up quickly and I averaged 9:01 per mile. Yay, all done! 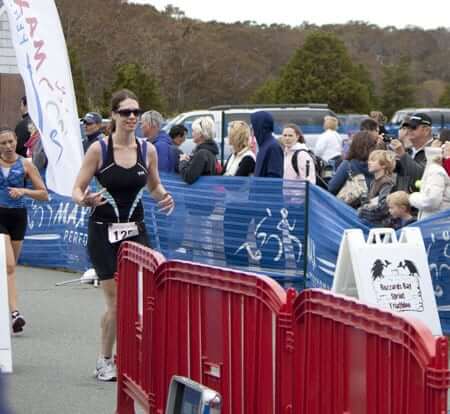 Races are so fun and I can’t wait to do another one next year! One of my favorite parts of racing is seeing how cute Apolinaras is about them. He takes a ton of pictures while he’s cheering and always rushes over with extra layers of clothes because he’s worried I’ll get too cold when I’m done. I also really love how supportive the women tend to be of each other. It’s not uncommon for us to encourage each other during the race!

Anyway, during high school, we usually headed to Dairy Queen after summer swim meets, where I always devoured a Peanut Buster Parfait. So, today’s recipe is a little twist on one of my favorite refueling treats. These little cups have a bottom brownie layer and middle cheesecake layer. Then I mixed caramel with some peanuts to top them off. So good! 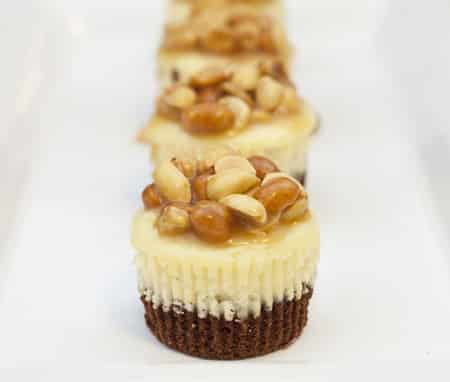 Directions:
To make the brownie layer, heat oven to 350˚F. Microwave the butter and unsweetened chocolate in a microwavable bowl at high power until the butter is melted, about 2 minutes. Stir until combined, then mix in the vanilla extract. Meanwhile, beat the sugar and eggs in a large bowl and then add in the melted chocolate mixture until smooth. Stir in flour and salt. Spread the brownie mixture evenly into 12 cups of a muffin pan lined with paper cups. Bake at 350˚F for 12 minutes .

Spread cheesecake mixture evenly over 12 partially baked brownie cups. Bake at 350˚F for 20 minutes or until cheesecake layer is set on edges and center is almost set but just slightly wiggly. Cool 5 minutes in the muffin tin, then remove from the tin and cool 15 minutes at room temperature on a wire rack. Place in refrigerator for 1 hour or until chilled.

Yep, another cake recipe! I finally broke out the canned pumpkin and the first thing I wanted to do was make pumpkin cupcakes with Nutella cream cheese frosting. I entered these decorated ones in our work Halloween baking contest today and didn’t win the prize...
Make this

We're at the San Francisco airport right now, and I'm feeling quite productive working on a blog post while we wait to board our flight to New Zealand! We're so excited to explore the country and take a much needed break from the daily grind. We're already off to a...
Make this

When my hubby and I got married, we had a sushi feast at our rehearsal dinner. To keep with the theme (like all good brides strive to do...), I wanted to serve dessert sushi. I searched the internet to see if there was something I could make and called bakeries, but...
Make this

So it’s official – I’m a triathlete! I finished my first sprint triathlon at the Cranberry Trifest yesterday. The race was a 0.5 mile pond swim, followed by a 11.5 mile bike ride, and 3.1 mile run. My official time was 1:28:00, which put me in the top fourth of my age...
Make this

Have you had any baking disasters? I’ve had my fair share, and naturally, they all tend to occur when I’m making a treat to share at a party. One time the pecan crust just fell off the sides of a cheesecake I had made for a lab birthday celebration. Another time a...
Make this

I may have a hard time remembering most facts, but my memory is almost perfect when it comes to recalling the details of remarkable meals. Two of my very favorite desserts we enjoyed while living in Chicago featured bananas. We devoured crispy cannoli shells filled...
Make this