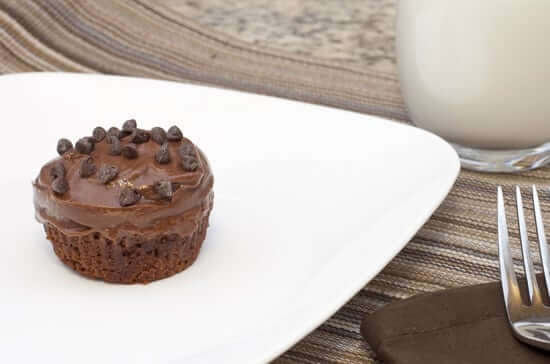 So, I had this idea to make some Nutella mousse – slightly sweetened whipped cream mixed with a generous amount of chocolate hazelnut goodness. My original plan was to top some cute little brownie cups with it, but umm, by the time the brownies were cooled, there was only enough mousse left to top half the batch…no idea what happened to the rest of the mousse. No problem though, because I got a photo of the finished product and that’s all that counts, right?

Apolinaras always jokes that Nutella should be banned from recipe contests because it makes everything so delicious that using it is kind of like cheating. I have to agree with him – this mousse is just way too addicting!

Directions:
To make the brownie cups, heat oven to 350˚F. Microwave the butter and unsweetened chocolate in a microwavable bowl at high power until the butter is melted, about 2 minutes. Stir until combined, then mix in the vanilla extract. Meanwhile, beat the sugar and eggs in a large bowl and then add in the melted chocolate mixture until smooth. Stir in flour and salt; stir in Nutella until smooth. Line a regular muffin tin with 12 paper cups and evenly divide brownie batter between the cups. Bake at 350˚F for 25 minutes or until a toothpick inserted in the center comes out clean and immediately use the back of a 1/2 tablespoon measuring spoon to make a round depression in the center of each cup. Cool completely, about 30 minutes.

Speaking of birthday treats, I made a very festive one for our lab technician Juliana this week. I topped a chocolate chip cookie base with a thick layer of eggless mini M&M cookie dough and then decorated the top with more M&Ms! I always like to add some oats...
Make this

The countdown to our flight to Arizona has begun and we’re playing our favorite game of trying to finish up all the perishables in our fridge before we go. We got a little off track when Apolinaras brought a half gallon of milk home on Sunday and thawed six pork...
Make this

Can you believe Valentine's Day is just around the corner? Apolinaras and I don’t exchange presents or anything, but I do like the excuse to indulge in more chocolate than usual and I also enjoy going all out in the kitchen to make a really decadent meal. This year...
Make this

Man, ice cream is hard to photograph, especially when it’s smothered with warm tempura bananas and caramel sauce – major melt factor! I first swooned over tempura bananas in New Zealand at a Japanese restaurant in Auckland. They were crispy on the outside and gooey on...
Make this

When the lovely Shannon invited Elina and I over for an impressive Etiopian feast earlier this week, I thought it would be fun to stick with the theme and bring a dessert we could also eat with our hands. For some reason, I couldn’t get the idea of making a snack cake...
Make this

I’ve still got mini cheesecakes on my mind. You can never have too many around, right? Well, I suppose that's not entirely true, but people are usually happy to help out with any surplus goodies! For this version, I mixed some rosemary into the cheesecake batter. Our...
Make this