I don’t think I’ve mentioned this before, but I’ve always been pretty athletic. I swam competitively from the second grade all the way through college and really excelled in the freestyle endurance races, although I was always trying to convince my coaches to let me swim butterfly because it was my favorite stroke. Here’s one of my favorite shots from college – my teammate Carmen and I had just blown the competition away at our conference swim meet in the mile, a 66 lap race, and I had just broken my first school record!

During grad school I participated on a Master’s team for awhile, but ended up getting a bit burnt out. I took a break for a few years when we moved to Boston, but I’m very happy to say that I’ve recently gotten back into it! I’m training for a triathlon that I’ll be doing with Shannon at the end of August and I’m really enjoying all my time in the water. I think it helps that I’m not just swimming, but also keeping things interesting by running, biking, and lifting to get ready for the race. Anyway, my favorite post-workout snack in college was a cinnamon raisin bagel covered in peanut butter, so when Apolinaras mentioned he wanted me to make some homemade protein bars, I knew I wanted to highlight these flavors.

Apolinaras forwarded me a recipe for homemade protein bars from one of his weightlifting buddies, which was very amusing because it contained tidbits like, “add/remove with a spoon if you messed up” and “throw in the protein power and mix it all around.” Very entertaining. Anyway, the bars contained just four ingredients – oat flour, milk, protein powder, and almond butter, so I decided to use these ingredients as a starting point and see if I could come up with something a bit tastier. I just mixed the oats, protein powder, peanut butter, milk, cinnamon, and raisins in the food processor and put the mixture into little mini muffin cups. The raisins provided a nice natural sweetness and I thought the bars tasted just as good as those that you can buy, but of course were much less expensive! 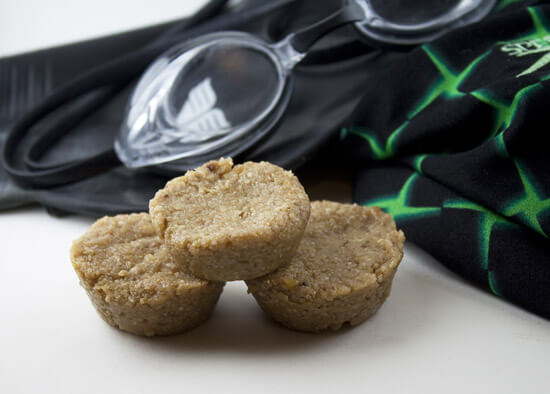 p.s. Apolinaras thought my shot of the bars with my swimming suit, googles, and cap was cheesy, but I think it’s cute!

Directions:
Place oats in a food processor and pulse until a fine powder forms. Add protein powder, peanut butter, milk, cinnamon, and raisins to the food processor and mix until a ball forms. Divide mixture and place into 12 mini muffin cups. Chill in the fridge for 30 minutes and pop out of cups. Makes 12 bars.

Today’s “recipe” is a bit of a pregnancy cliché. It all started when we were discussing the annual Boston area Fluff Fest at lunch one day. Marshmallow Fluff, also known as marshmallow crème, was invented in my town and is still made in Massachusetts. It’s probably...
Make this

I don’t think I’ve mentioned this before, but I’ve always been pretty athletic. I swam competitively from the second grade all the way through college and really excelled in the freestyle endurance races, although I was always trying to convince my coaches to let me...
Make this