I think I speak for the majority of food bloggers when I say that I started a blog because I love cooking and wanted a way to share my recipes with other foodies. But, I quickly realized that no matter how creative and delicious your recipes are, no one will actually be inspired to make them unless they look appetizing! Photography has never been a strong point of mine, and although I think my photos have come a long way since I started my blog, my TasteSpotting and FoodGawker acceptance rates only hover around 30%. I want to do better – I want people to drool when they see my photos!

One night, a few months ago, while I was attempting to edit a particularly blah set of photos, I thought to myself – I really wish I had professional help. Oh a whim, I googled “Boston food photography” and was immediately blown away by the mouth-watering photos on professional food photographer Gary Tardiff’s website. Before I lost my nerve, I quickly sent him an email asking if he would be willing to give a group of local food bloggers some tips. Now I really wasn’t expecting to hear anything back, so you can imagine how excited I was when Gary said he would love to have us all visit his studio! 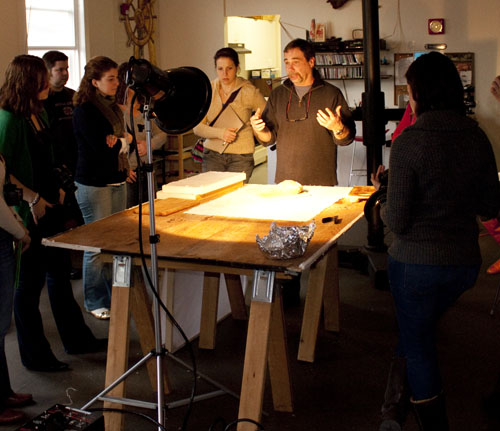 So instead of posting a recipe today, I’m going to give you a behind the scenes look at a professional food photographer in action and share some of the wonderful tips he gave us! Spending the afternoon with Gary was absolutely amazing! He spent over 3 hours demonstrating how he takes such gorgeous pictures and answering all our questions!

Gary has been a professional food photographer for 32 years and mainly does advertising work for companies and restaurants, like Chili’s, Dunkin Donuts, Kraft, and Pillsbury, to name a few. 95% of his photos are taken in his studio in Southie, which has a kitchen stocked with every type of food prop you can imagine (we were all insanely jealous of his wall of colorful plates). He stressed that 99% of the food he photographs is real and prepared just the way it would be at home. 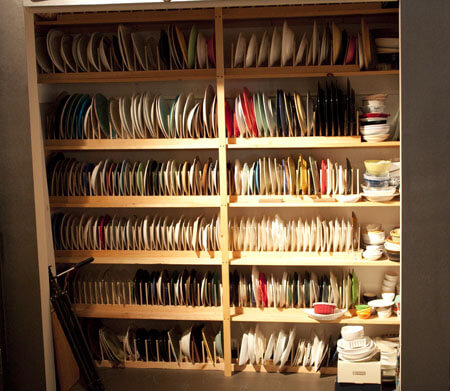 Here are some of my favorite tips:

Understand and use the exposure triangle – ISO, shutter speed, and aperture – to your advantage. Exposure is the amount of light that reaches the camera’s sensor. I already had a basic understanding of this concept but really loved his analogy of thinking about it because it can get confusing! He said to imagine a perfect exposure as a half full glass of water (with underexposure being less than half full and overexposure being entirely full). Shutter speed is how quickly the water from the faucet above the glass is turned on and off. Aperture is the size of the stream of water (how far the faucet is opened, with a large aperture being a larger stream of water). The size of the glass is ISO (how much water is needed to half fill the cup, which is how sensitive the camera sensor is to light).

There are many ways to get the glass half full and all three parameters relate to one another. With food photography, you should have a nice light source and can usually use a low sensitivity ISO of 100 or 200 (the lower the ISO the less noise you have, but the higher the number the more sensitive the sensor is to light, so in a low light situation (e.g it’s cloudy out) you may need a high ISO and have to deal with slightly more grainy photos), so you mostly have to worry about the aperture and shutter speed relationship. Aperture changes the depth of field, so you may want to pick the aperture first and then adjust the shutter speed as needed to get the correct exposure. For example, if you decide to use a small aperture to get a large depth of field (so an entire plate of cupcakes is sharp) then the shutter speed will need to be longer – the faucet is a small stream of water so it must be left on for a longer period of time. If you decide to use a large aperture to get a shallow depth of field (one cupcake is sharp and the rest are blurred in the background), then the shutter speed will need to be shorter – the faucet is a large stream so you need to shut it off quickly. In general, in food photography, we’re not worried about capturing motion and mostly concerned about depth of field, but if, for example, you want a quick shutter speed to freeze the motion of a drizzle of caramel about to hit a cupcake, you can select your shutter speed first and then adjust the aperture as needed to retain the correct exposure.

Along these lines, play with the depth of field. Your DSLR standard kit lens may not be the best for food photography because the aperture range is limited. With a large aperture, only the part of the picture you are focusing on is sharp and the rest is blurred (e.g. f/1.4 – as a side note, f stops are like fractions so just like 1/2 is bigger than 1/4, f/1.4 is larger than f/10) so you have a shallow depth of field. With a smaller aperture (e.g. f/10), more of the image becomes sharp and you get a larger depth of field. For example, on my standard 18-55mm Canon zoom lens, the maximum aperture is only f/5.6 at 55mm. If you invest in a prime 55mm lens (a stable lens that does not zoom), you can get a f/1.4 or f/1.8. I just added one of these to my wishlist! While it’s nice to eventually learn how to manually focus your camera (selecting ISO, aperture, and shutter speed on your own), many cameras have semi-automatic settings you can use where you pick your aperture, for example, and then the camera selects the correct ISO and shutter speed for you. This is a great starting point. Also, Gary actually never uses a macro lens, so you can certainly get great shots with just the prime!

Use a tripod. First, it slows you down, so instead of quickly snapping a shot it makes you think more about what you want to feature in the photo. Second, it prevents blurry photos when you’re using a long shutter speed.

Always adjust the white balance directly on your camera before taking your shots. Basically, you take a picture of something white and then tell the camera that’s what white is (your camera manual should have specifics on how to do this!). This is important because different types of light have different hues (e.g. tungsten incandescent bulbs cast a yellow hue). Gary does use Photoshop, where you can adjust white balance with a raw image, but prefers to get the image as close to perfect as possible when he’s taking it. Also, always shoot in raw format and then make adjustments. Shooting in JPEG already compresses your image and colors are lost!

Set up a lighting studio that mimics natural light and play with the lighting until you’re satisfied with the image. This is fun and doesn’t have to be expensive! Here’s what Gary set up: 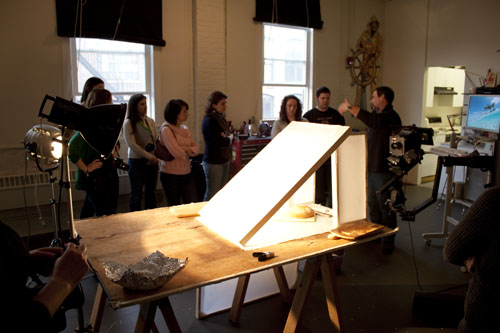 He always backlights the food. In this case, the light on the left side of the photo is being softened (this reduces the number of harsh shadows) by the screen in front of it. He uses vellum paper (which can be bought at art supply stores) mounted on a wooden frame for the screens. He also uses different sized mirrors and white particle board to reflect light where needed.  I really enjoyed watching him in action playing with the light and I’m now dreaming of turning our extra bedroom into a lighting studio!

Take the time to learn how to set the focus points on your camera instead of using autofocus. Your camera doesn’t know what you want to focus on!

And finally, have fun with different props and colored plates.  When shooting Adrienne’s loaf of bread, Gary placed the loaf on a small wooden cutting board and then placed a bread knife and napkin in front of it.  In less than 30 seconds his picture immediately looked better than any of mine!  I definitely want to improve in this area.

I hope these tips have been helpful to everyone!  A HUGE, HUGE, HUGE thank you to Gary for taking time out of his busy schedule to help us!  Also, I’m still processing everything we went over, so check out everyone’s blogs for more tips I may have missed and examples of the food we brought and took pictures of in Gary’s studio! 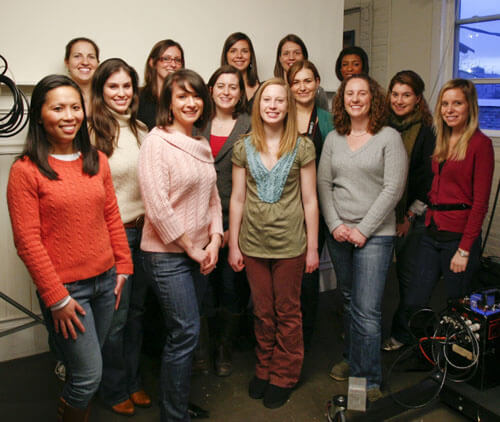 Although I’m a scientist, I have to admit that I don’t know much beyond the basics of how science affects cooking, which is actually a bit embarrassing! So, I jumped at the chance to review Harold McGee’s new book, Keys to Good Cooking. The book doesn’t come out until...
Make this

Thanks to everyone who watched me on Ultimate Recipe Showdown yesterday! I didn’t bring home the big prize, but I truly enjoyed every second of the competition and want to send out a huge thank you to everyone at Food Network and High Noon Entertainment for such an...
Make this