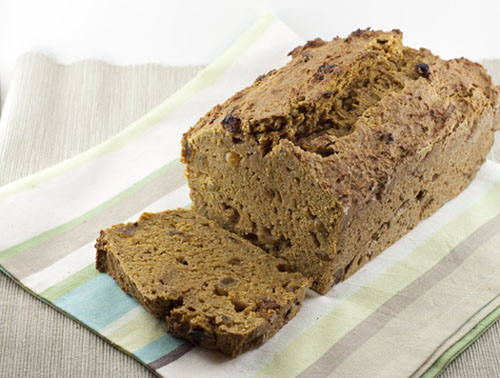 We’ve been all about beer lately. Apolinaras has recently gotten into home brewing and just proudly sealed 40 bottles of Oak-Aged Baltic Porter last night. It’s supposed to age for at least a month before it’s really ready, but I snuck a couple sips of the green stuff and am already impressed – it was really good. It’s very cute to see him be as passionate as me in the kitchen!

Having beer on the brain, I decided it would be fun to try making some pumpkin bread that featured both pumpkin puree and pumpkin beer, along with some pumpkin butter from Trader Joe’s. This pumpkin triple threat is definitely more savory than traditional pumpkin bread, but the golden raisins bring it all together with a slight touch of sweetness. The best part is that I only used a cup of beer in the recipe and got to enjoy the rest of the bottle while I was mixing the loaf up. I’m hoping next time I’ll be able to use one of Apolinaras’ brews in the recipe instead!

Directions:
Heat oven to 350˚F. Place pumpkin puree in a small nonstick pan and simmer over medium heat for 8 to 10 minutes, stirring frequently, or until reduced to 1 cup. Cool completely.

Lightly grease and flour a 9-inch loaf pan. Mix cooled pumpkin puree, butter, pumpkin butter, brown sugar, and egg in a large bowl until well mixed. Stir in pumpkin beer. Mix in flour, baking soda, cinnamon, ginger, nutmeg, and salt; stir in golden raisins. Spread dough into prepared pan and bake at 350˚F for 50 to 60 minutes or until a toothpick inserted into center of the loaf comes out clean. Makes 12 servings.

Apolinaras and I spontaneously headed to the grocery store a few weeks ago around 11pm to satisfy my sweet tooth, which is really rare for us. I usually just have a few chocolate chips if there are no treats in the house and I’m craving dessert, but that just didn’t...
Make this

I’ve gotten into the habit of buying one pound logs of goat cheese from Costco and since goat cheese goes bad faster than other varieties, I’m always trying to quickly use it in several different ways after opening the package – there’s nothing worse than wasting goat...
Make this

I was super excited when my friend Shannon organized an apple picking field trip the other weekend to Smolak Farms! Not only would I get to check out a local orchard for the first time, I also would get to meet several of my favorite fellow Boston food bloggers,...
Make this

It's finally time for our Lithuania trip recap! We traveled throughout the country and I'm going to spread the highlights of our adventure over the next three posts. Lithuania is the same size as West Virginia and sits above Poland and Belarus and across the Baltic...
Make this

Egg and Potato Squares with Gruyere, Asparagus, and Mushrooms

Happy New Year! Did anyone else make any foodie resolutions? My goal last year was to get my blog up and running, and I remember spending the first few weekends in January designing the header and side bars for my little site. This year I just want to continue...
Make this

My good friend Renee got me a gorgeous cookbook for Christmas called Sarabeth’s Bakery. Have you heard of it? It’s filled with recipes for sophisticated bakery treats and I spent an entire evening drooling over all the lovely step by step photos. It was actually this...
Make this

Having just visited San Diego last fall for our friend Renee’s wedding, I decided to take it easy on the tourist attractions during this trip and instead use my time off from the conference to unwind. I slept in late, ate breakfast while enjoying the amazing views...
Make this

My mom used to make breakfast for dinner every Thursday night when I was growing up and I always looked forward to it. Really, is there anything better than a big plate full of cheesy eggs, pancakes with melted butter and maple syrup, and fruit salad? I would love to...
Make this