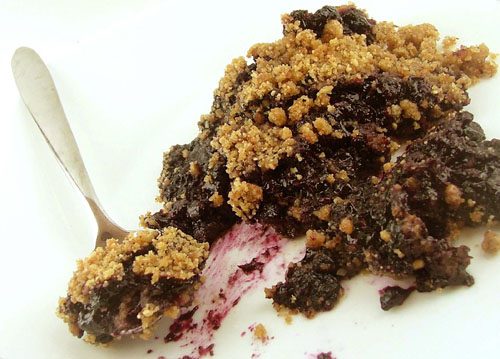 My favorite part of Trader Joe’s is the cereal aisle. They have so many unique choices! I normally have one of the high fiber/protein super nutritious ones for breakfast, but always enjoy a cup of the less healthy ones for dessert after dinner. They have one with chocolate one that is really delicious and I recently devoured a box featuring pomegranate and blueberries together. It was so good that I immediately knew I wanted to create a real dessert with this flavor combo.

I originally attempted this crumble a couple weeks ago when Reeni hosted BSI with the Blogger Secret Ingredient of blueberries. But, it turned out to be a disaster! I reduced some pomegranate juice down to a syrup and then threw it on a bunch of frozen blueberries. The syrup solidified on just the blueberries it hit and the whole thing turned out to be a huge watery mess after it baked. But, the dessert was much more successful after I tweaked a few things this weekend. I simply simmered the blueberries in the pomegranate juice until the mixture reduced and then thickened the mixture with a bit of cornstarch. The tang of the pomegranate juice really complimented the blueberries! The key to the crumble topping is the almond meal (from Trader Joe’s of course!). Please do not substitute anything else because it adds another layer of flavor and seriously elevates the topping from good to super addicting!

Directions:
Preheat oven to 350˚F. Stir together blueberries, pomegranate juice, and granulated sugar in a large stockpot over medium high heat. Bring mixture to a boil and then reduce heat and simmer for 20 to 30 minutes or until liquid reduces by half. Mix cold water and cornstarch together in a small bowl and add the mixture to the blueberries. Stir constantly until the mixture thickens to desired consistency, about 5 minutes.

Meanwhile, prepare the crumble topping by mixing the brown sugar, almond meal, flour, cinnamon, and salt together in a medium bowl. Stir together butter and vanilla and mix with flour mixture.

Pour the thickened blueberry mixture into an 8-inch square pan and top evenly with the crumble mixture. Bake at 350˚F for 15 to 20 minutes or until topping is golden brown. Makes 8 servings.

Our whirlwind NYC tour would not have been complete without visiting a few famous bakeries! The two at the top of my list were Bouchon and Levain, so the first thing we did after checking into our hotel was head up to Bouchon Bakery in the Time Warner Center right...
Make this

My favorite part of the 4th of July growing up was always trying to spell out my name with a sparkler before it burnt out. I've always loved a good challenge, so it never got old! Now it’s all about the food, and this year I dreamed up a festive berry tart that would...
Make this

I'm very excited to be featured on Jen's blog, Beantown Baker, as part of her Friday Favs series today!  You'll find my recipe there for these Reese's Peanut Butter Cookie Cups.  They have a peanut butter cookie bottom filled with a Reese's cup and are topped with a...
Make this

Whenever I need a little afternoon pick me up at work, I head over to the Starbucks across the street from my lab. I was never really into coffee until a few years ago when I tried lattes – mmm, just thinking about them makes me smile, and since a latte is mostly...
Make this

I went to a super fun blogger event on Saturday - Shannon’s annual cookie swap! Last year I made cookies inspired by my very favorite ice cream, Ben and Jerry’s Chubby Hubby, and this year I wanted to incorporate Nestle’s Flipz White Fudge Coated Pretzels aka crack...
Make this

Who else looooves the Olympics?! I’ve been doing my best to avoid the web and twitter during the day so I don’t accidently read any spoilers before the broadcasts at night. I just love tuning in and watching all the events, and I want to cheer along and be surprised...
Make this

I’ve always loved the Olympics (just hearing the theme song makes me smile!) and have been glued to the couch the past week enjoying the games every night. Since I usually don’t watch nearly this much TV, I’ve been keeping my restlessness at bay by multitasking and...
Make this