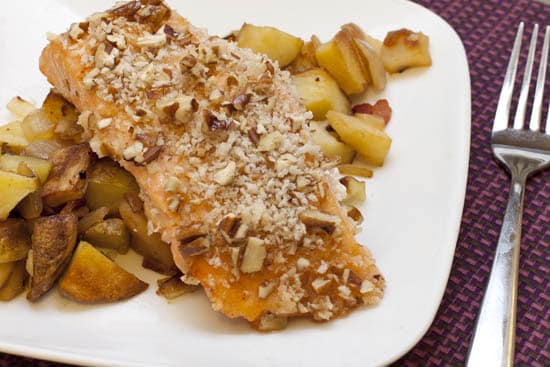 I don’t usually buy a lot of produce at Costco, since it’s tough for just the two of us to eat our way through their large packages of fruits and veggies before it all spoils (although I do regularly make an exception of their Brussels sprouts and berries because we gobble those right up!), but the other day a 15 pound bag of potatoes ended up in my cart. I was craving roasted potatoes and feeling way too lazy to head to the regular grocery store just to pick up a smaller package. Plus, I was feeling up for a little potato challenge!

The first thing I did when I got home was whip up a potato hash with bacon, onions, and apples. It’s great for breakfast, but I enjoyed it most topped with a lovely piece of salmon glazed with maple syrup and crusted with chopped pecans and panko. This yummy meal also came together in a flash since I made the hash the day before and then just quickly cooked up the salmon before dinner. Ok, I’m off to brainstorm some more potato recipes – only 6 pounds left to go!

p.s. The winner of my Milk Bar giveaway was Bianca – congrats!

To make the salmon, heat oven to 350˚F. Mix pecans, panko, and salt together in a small bowl. Heat olive oil over medium high heat in a large nonstick skillet and sear the salmon fillets, about 1 to 2 minutes on each side. Place seared fillets in a large baking dish and use a pastry brush to evenly brush with maple syrup. Evenly sprinkle pecan panko and press gently into the salmon. Bake salmon for 10 to 12 minutes at 350°F or until cooked through. To serve, divide the hash evenly among 4 plates and place salmon on top. Makes 4 servings.

Sometimes I get in a dinner rut and forget how much I enjoy cooking with certain ingredients. I was recently reminded that I hadn’t used chicken sausage in a long time after seeing a few delicious and quick meal recipes on Meghan’s fantastic blog, You’re Gonna Bake It...
Make this

Time for part 2 of our New Zealand adventure (you can check out part 1 here)! After visiting Rotorua, we drove down to see Lake Taupo, the largest lake in New Zealand, which fills a caldera created by a huge volcanic eruption, and the Huka Waterfalls. Taupo is a...
Make this

Some things are just meant to be. A couple of weeks ago I was jogging through Harvard Square when I heard someone calling my name. I was disoriented for a second, but when I turned around, I was surprised to see that it was my friend Rashmi from college – crazy, huh –...
Make this

First of all, thanks to everyone who entered my blogiversary giveaway. A few of you correctly guessed the very common ingredient I don’t like is....black pepper! In fact, when Apolinaras wants to make sure I don’t dig into his portion of mac & cheese, he’ll...
Make this

I’ve slowly been working on a few recipes to go with my recap posts about our amazing trip to New Zealand, but I haven’t even started to go through all our pictures. The task just seems too overwhelming...but today I have a little teaser post – Thai turkey burgers...
Make this

I thought it would be fun to share a little pregnancy update today! I’m somehow already 34 weeks along – how crazy is that? Our little girl is very active and loves to kick and squirm around, especially after dinner when I’m relaxing. Apolinaras’ voice always seems to...
Make this

I spent the first part of this week at a conference in Vermont with my lab mate Dave. The food at these things tends to be pretty mediocre, but we did have a delicious meal at American Flatbread in downtown Burlington (which was a super cute area!). Our flatbread was...
Make this