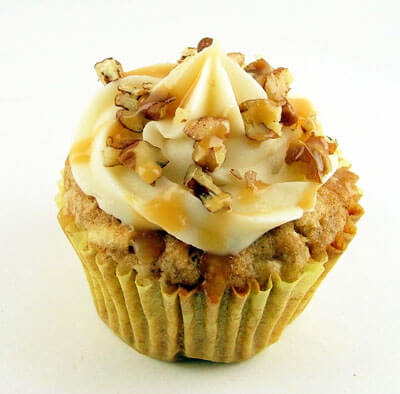 I figured it’s about time that I actually post a cake recipe – you know, since my blog is called Cake, Batter, and Bowl and all… I couldn’t resist the cute word play on Shake, Rattle, and Roll when I was brainstorming names with my Dad over Christmas last year, but in reality the title wasn’t totally appropriate because prior to starting this blog my favorite cake to make was from a box of Pillsbury’s Funfetti mix! I had made my mom’s famous chocolate cake from scratch a couple of times, but didn’t really get into other recipes until I kept running across cakes on the blogosphere that I was inspired to make. Even though I kept gaining more and more experience, for the longest time I was still too intimidated to experiment on my own. However, this all changed when I was encouraged to come up with an original cake recipe (details about that in a future post). I actually had fun dreaming up flavor combinations when I got into it and found it wasn’t quite as challenging as I had envisioned. No cakes fell in the oven or were inedible because they were too dry. I even managed to nail the frosting consistencies and improved my piping skills. These cupcakes were one of the first ideas that popped into my head.

I decided they needed to be stuffed with shredded apples and spiced with cinnamon, cardamom, ginger, and cloves. Then I topped the cupcakes with a cream cheese frosting with a hint of lemon and toasted pecans. My very favorite part of this recipe is the caramel drizzle. Caramel is actually pretty easy to make at home, since you don’t even need a candy thermometer. I used apple juice as the base instead of water and it turned out so well! This recipe is broken down by each component so it doesn’t get too confusing, and you really only need a couple tablespoons of the caramel for the cupcakes, so you’ll have lots left over for other treats!

p.s.  The winners of my Hotel Chocolat giveaway were Danielle and Biz – congrats!

Prepare the Cupcakes: Preheat the oven to 350˚F. Mix together flour, cinnamon, cardamom, ginger, cloves, baking powder, and salt and sift the mixture into a large bowl. Beat butter and sugar with a mixer in a large bowl until creamed. Add in eggs and vanilla extract and mix until smooth. Slowly mix in sifted flour mixture until smooth. Mix in shredded apples. Line a standard 12-cup cupcake pan with cupcake liners and evenly spoon cupcake batter into the liners, filling cups 3/4 full. Bake cupcakes at 350˚F for 25 to 30 minutes or until a toothpick in the center comes out clean and the tops are light golden brown. Cool for 5 minutes in the pan and then transfer cupcakes to a cooling rack. Cool for 20 minutes or until cupcakes are room temperature.

Prepare the Cream Cheese Frosting: Place powdered sugar, cream cheese, butter, vanilla extract, and lemon juice in a large bowl and beat with a mixer until smooth, scraping down sides of the bowl as needed.

Prepare the Caramel Drizzle: Meanwhile, prepare caramel drizzle. Place apple juice and sugar in a medium saucepan, stir well, and bring the mixture to a boil over medium high heat. Boil for 10 to 15 minutes, stirring frequently, or until mixture is a caramel color. Monitor closely so the sugar does not burn! Remove pan from the heat and pour in slowly stir in cream and vanilla. The mixture will boil up. Return pan to the heat and boil an additional 2 to 5 minutes or until mixture thickens slightly, stirring frequently. Remove from heat and allow caramel to cool to room temperature.

Have you had any baking disasters? I’ve had my fair share, and naturally, they all tend to occur when I’m making a treat to share at a party. One time the pecan crust just fell off the sides of a cheesecake I had made for a lab birthday celebration. Another time a...
Make this

I think Boston is a bit of a cold city. It’s not something I notice anymore on a daily basis, but when I’m visiting more friendly regions, I’m often struck by the joggers who nod and give you a smile as you run past and the eager store employees who go out of their...
Make this

I may have a hard time remembering most facts, but my memory is almost perfect when it comes to recalling the details of remarkable meals. Two of my very favorite desserts we enjoyed while living in Chicago featured bananas. We devoured crispy cannoli shells filled...
Make this

Can you believe Valentine's Day is just around the corner? Apolinaras and I don’t exchange presents or anything, but I do like the excuse to indulge in more chocolate than usual and I also enjoy going all out in the kitchen to make a really decadent meal. This year...
Make this

Do you have any habits that ever make you feel like less of a “foodie”? I have a couple – I enjoy milk chocolate more than dark, and I prefer creamy Skippy peanut butter over the versions that just contain organic roasted peanuts and salt. I’ve tried – I really have,...
Make this

I’m proud to report that I finally squeezed in some holiday baking! I whipped up these gingerbread cookies and Emily’s soft buttery sugar cookies on Monday night and they were both a big hit at work. Two thumbs up for both recipes! Of course, I also couldn’t let the...
Make this

I’ve still got mini cheesecakes on my mind. You can never have too many around, right? Well, I suppose that's not entirely true, but people are usually happy to help out with any surplus goodies! For this version, I mixed some rosemary into the cheesecake batter. Our...
Make this