Time for part 2 of our New Zealand adventure (you can check out part 1 here)! After visiting Rotorua, we drove down to see Lake Taupo, the largest lake in New Zealand, which fills a caldera created by a huge volcanic eruption, and the Huka Waterfalls. 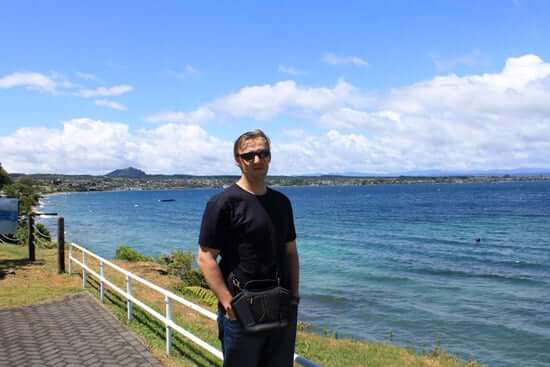 Taupo is a resort town with a super cute downtown, and I had a very tasty bowl of seafood chowder with mussels, shrimp, calamari in a light creamy broth, at Replete Cafe. 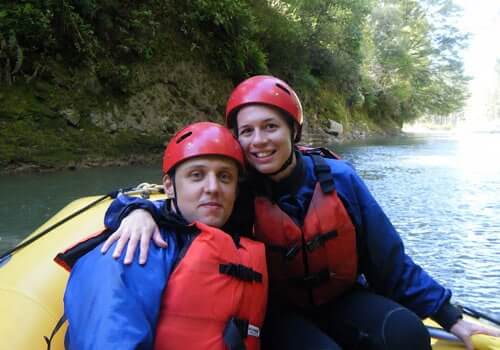 After lunch, we headed down to Tongariro National Park to go white water river rafting with Tongariro River Rafting! It ended up just being us and two guides on our raft, so it was really fun. 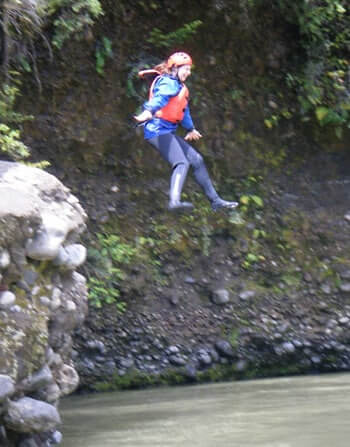 We took a break to jump off a few cliffs. 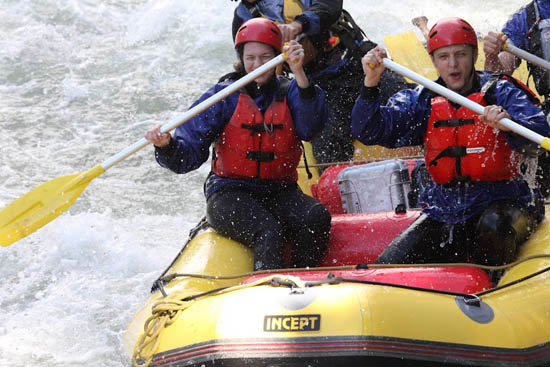 And the rafting company even had a photographer ready on the shore to capture some action shots! 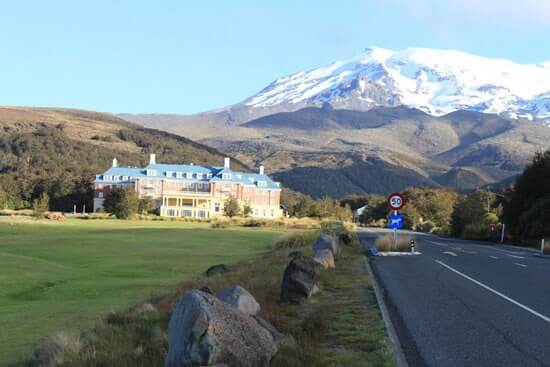 Our picture perfect hotel that night was right next to the three prominent volcanoes in the area, Mount Ruapehu, Mount Ngauruhoe, and Mount Tongariro. 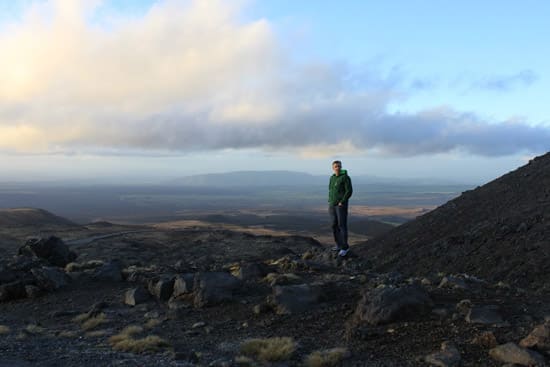 We drove to the top of Mount Ruapehu for some gorgeous views. 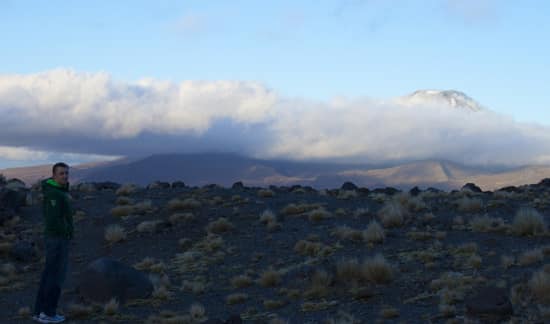 And yes, Mount Ngauruhoe was Mount Doom in the Lord of the Rings movies. Here it is peeking out from behind the clouds.

The next morning we drove down to Wellington, which is on the Southernmost tip of the North Island and a bustling big city like Auckland. The five hour drive was a bit of a journey, but a little pit stop for some traditional savory Raetihi pies at Kristy’s Café in Whanganui helped break the drive up a bit. I was also pretty tickled when we saw these sheep crossing the road! 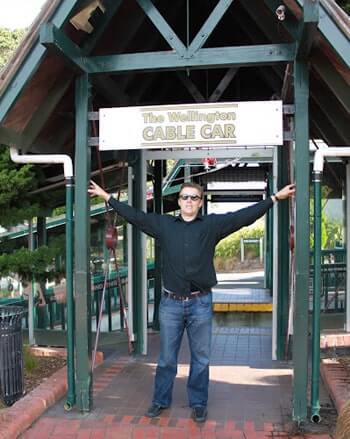 In Wellington, we took the cable cars up to the Wellington Botanic Gardens. 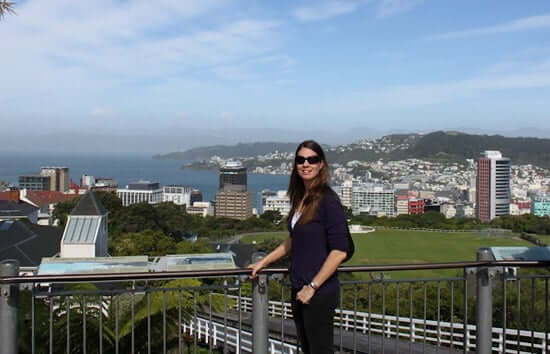 Where we took in a lovely view of the city. 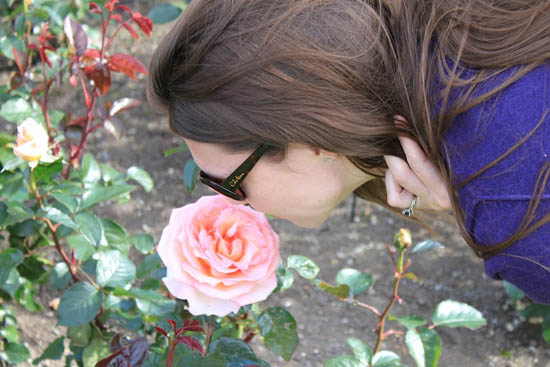 And I really enjoyed the many rose gardens. 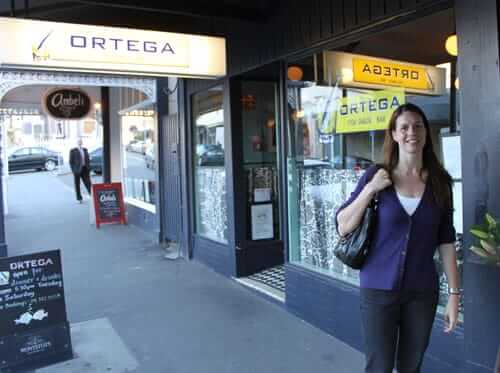 We also had our very favorite meal of the trip in Wellington at Ortega Fish Shack that evening. I didn’t take any pictures, but everything was just amazing. We started with whitebait fitters, which are a New Zealand specialty. Whitebait are exactly what they sound like – tiny little fish used for bait. The fritters contained 100s of the little fish all cooked into a patty – really meaty and delicious, but probably not something I would have tried unless it was so highly recommended to us! For dinner, I had gurnard over a mushroom cream sauce with pasta and Apolinars had lightly smoked fish with pork and shrimp fried rice. We decided to drink our dessert at Mac’s BrewBar, right on the ocean that night. 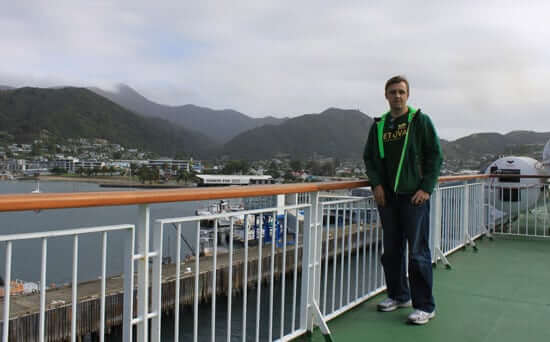 The next morning we took the 3 hour Interislander ferry ride from the North Island to the South Island. Even though the boat was huge, the water was rough, and I got really seasick, ugh, so I don’t have much to say about our time on the ocean. Here’s a cute pic of Apolinaras though. 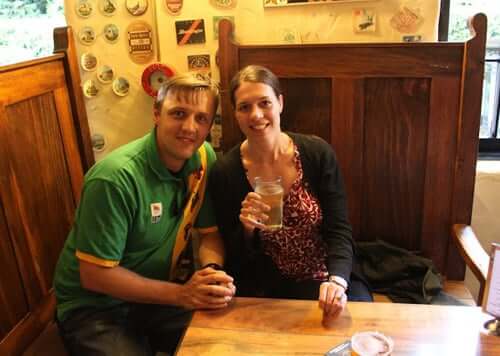 Then we drove to Marlborough wine country and checked into a lovely B&B called Hillsfield House, which I highly recommend you stay at if you’re ever in New Zealand. We had a causal English pub dinner of fish and chips and beef hot pie at Cork and Keg, which was a short stroll from our B&B. 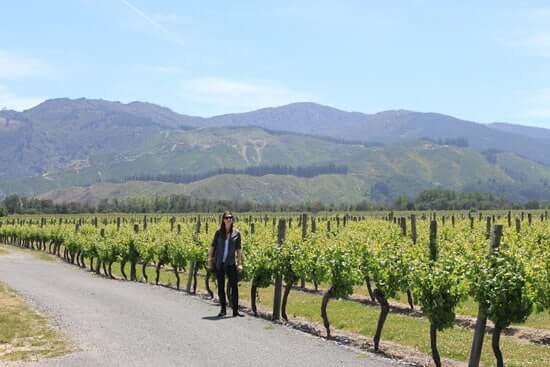 One of the perks of Hillsfield House is that the hostess, Jo, delivers breakfast to your room whenever you request it. After filling up on hot croissants, fruit, coffee, and freshly squeezed orange juice, we drove to several wineries for tastings! 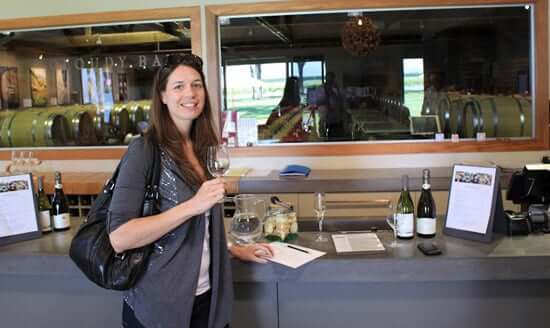 This wine region is most well known for their sauvignon blanc and Cloudy Bay is probably the most famous winery. 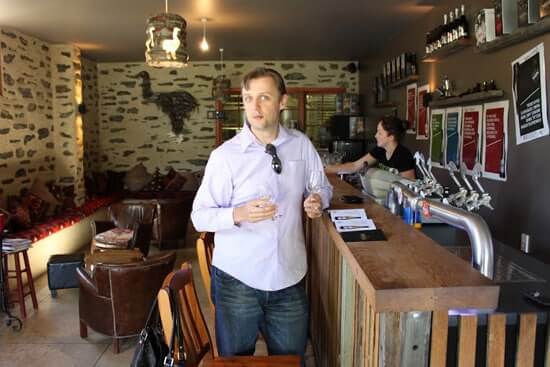 Since Apolinaras isn’t a huge wine fan, we also did a tasting at the only brewery close by – Moa! 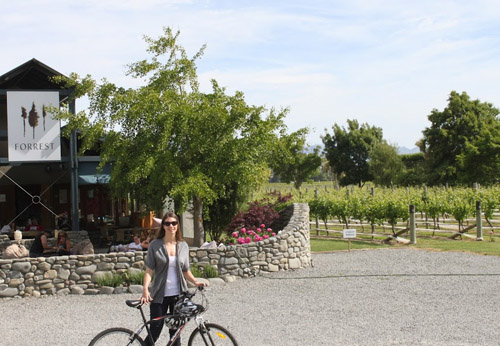 We stopped at Wither Hills Winery for lunch and then left our car at the B&B and took some bikes out for a spin to explore a couple more wineries, including one of our favorites, Forrest Estate. 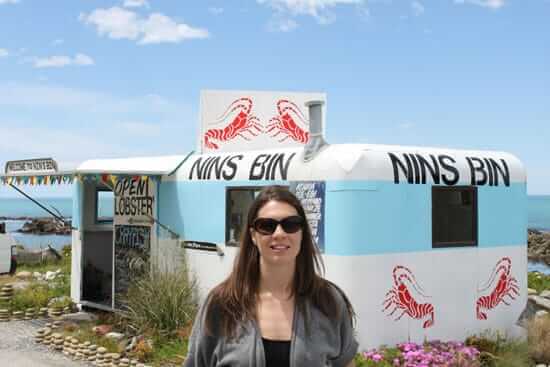 The next morning we drove to Kaikoura, a beautiful town on the ocean with seal colonies, and opportunities for whale and dolphin watching. Along the way, we stopped at Nin’s Bin for freshly caught crayfish (called spiny lobster here in the US) for lunch.

And my very first video on CB&B! I spontaneously recorded Apolinaras’ trick for the easiest way to remove meat from your lobster- no fancy tools needed! 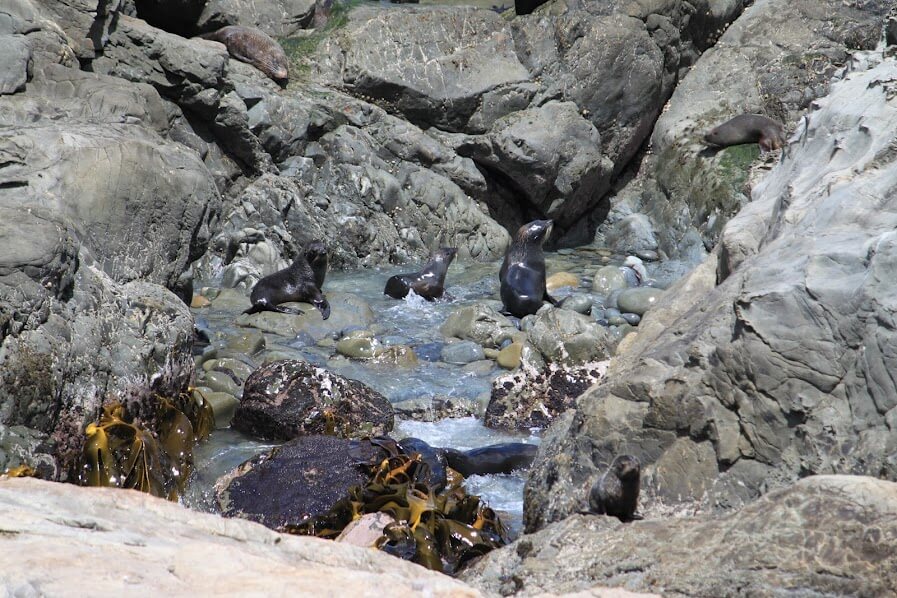 We also visited a seal colony. 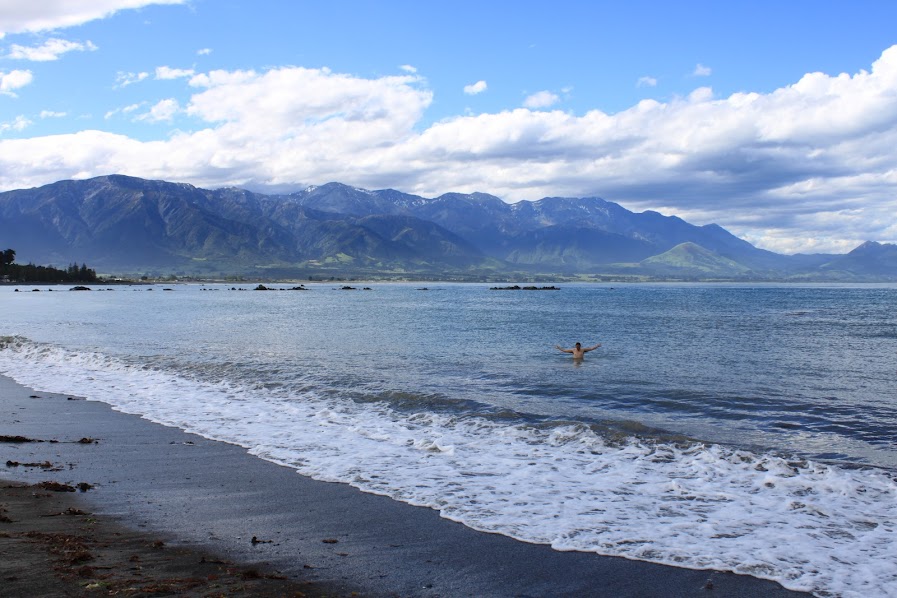 And then Apolinaras went for a dip in the ocean. Just gorgeous! 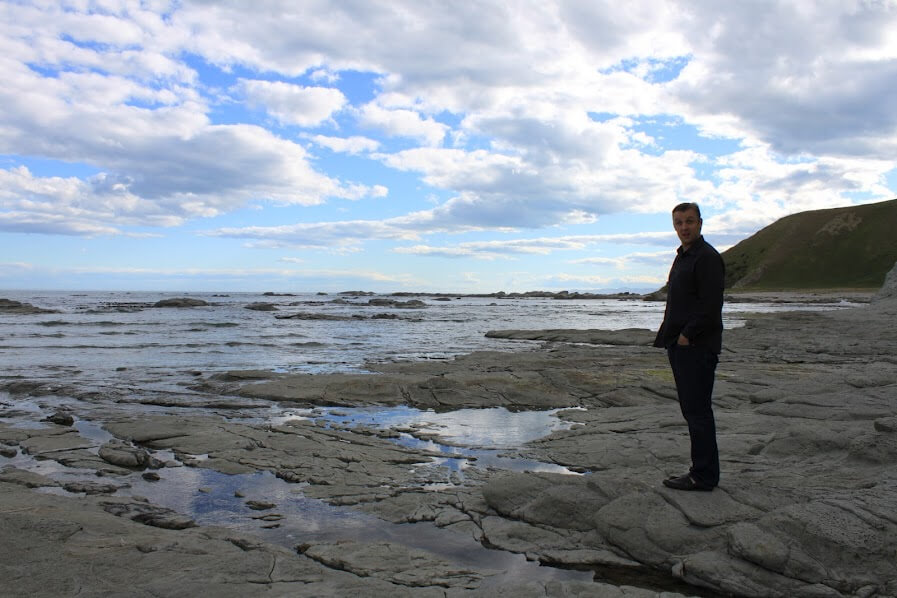 After taking a beautiful hike by the water, we had dinner at Tuti’s, which featured Indonesian/Singaporean dishes. I had a super flavorful green shrimp curry and Apolinaras had duck with an Asian orange sauce, which inspired today’s recipe. 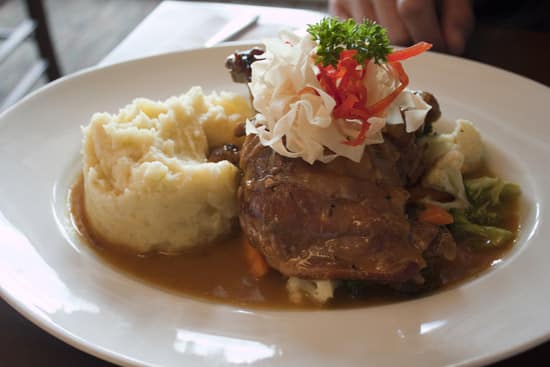 I roasted a chicken with an Asian orange marinade and glaze of orange marmalade, soy sauce, rice vinegar, canola oil, sesame oil, and garlic. I stuffed the cavity of the chicken with an orange and some more garlic. Very juicy and delicious! Oh, and the recipe below is for one bird, but I actually roasted two because one chicken doesn’t last very long in our house! One more NZ recap post to go! 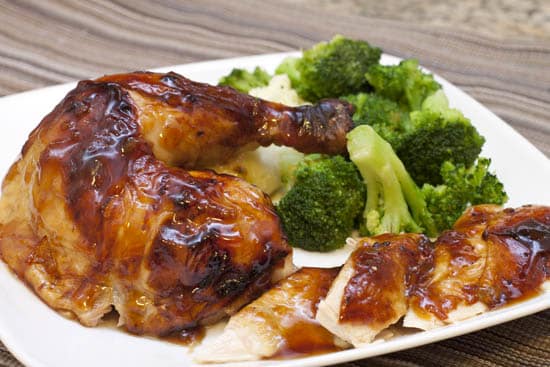 Directions:
To prepare the marinade, stir together orange marmalade, soy sauce, rice vinegar, canola oil, sesame oil, and garlic cloves in small bowl. Stuff the chicken cavity the orange and head of garlic. Tie the legs together with kitchen twice and tuck the wings under the body of the chicken. Place chicken in a baking pan and cover with 1/2 cup of the marinade. Refrigerate remaining 1/2 cup marinade. Cover chicken with foil and marinate in the refrigerator for 3 hours to overnight.

To roast the chicken, remove chicken 30 minutes prior to roasting, to allow it to come to room temperature, and heat oven to 400°F. Remove any large pieces of orange rind leftover from the orange marmalade marinade (otherwise they may burn). Place chicken in a roasting pan and sprinkle evenly with salt. Roast chicken at 400°F for 1 hour and 15 minutes to 1 hour and 30 minutes or until the juices between the leg and thigh run clear and temperature of the thickest part of the thigh is 160°F. Cover chicken with foil while roasting if the skin starts to get too brown (I covered mine after 45 minutes). Remove chicken from the oven and cover with a tent of aluminum foil for 10 minutes.

Meanwhile, place reserved 1/2 cup marinade in a small stockpot and simmer over medium high heat for 5 minutes or until thickened. Carve and serve the chicken and top with the sauce. Makes 6 servings.

So after a few nights in Vilnius, we headed out on a road trip to see the rest of the country. The Lithuanian countryside is just gorgeous. Rolling cow pastures and farmland are interspersed with forests full of pine trees. We couldn’t resist stopping a few times to...
Make this

Apolinaras and I recently traveled to Portland, Oregon, for my dear friend Britt’s wedding. Britt, Annika, and I were inseparable during college and whenever we’re together, it’s like nothing has changed - we had soooo much fun!  Britt and her new hubby Ben were just...
Make this

Sometimes I get in a dinner rut and forget how much I enjoy cooking with certain ingredients. I was recently reminded that I hadn’t used chicken sausage in a long time after seeing a few delicious and quick meal recipes on Meghan’s fantastic blog, You’re Gonna Bake It...
Make this

One of my favorite meals to whip up when we’re low on groceries is a red or green Thai curry. We always have coconut milk, Thai curry paste, and rice in our pantry, and even if we don’t have any fresh produce, I can usually at least dig up some frozen veggies to round...
Make this

I was super excited when my good friend Eva asked if we would like to use her family’s farm share while they visit her parents in Austria for the next few weeks. Eva is inspirational because she works full time as a pulmonary pediatrician and is raising the two...
Make this

We’ve been so busy lately that I’ve baked more “emergency” frozen pizzas for dinner than I’d care to admit. I have managed to whip up some soba noodles a couple of times though. They’re so quick and tasty, and there’s nothing better than a one pot meal. For this...
Make this

Whenever I think of Cajun pasta, I think of Emeril. Remember when he was on the Food Network 24/7? I became a big fan of his after visiting his restaurant NOLA in New Orleans with my good college friends Susie and Britt over New Year’s 2002. I remember enjoying a...
Make this