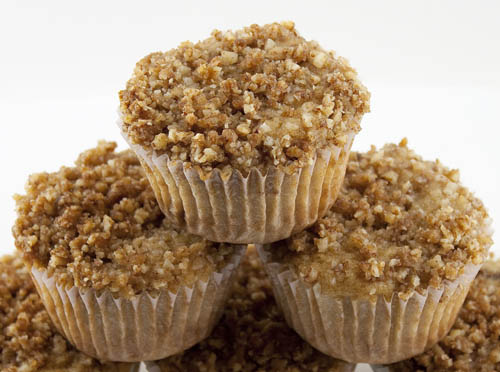 Apolinaras and I have a similar outlook on life and agree on all major issues that couples tend to fight over (family, money, politics, etc), but sparks always fly over desserts! I like to indulge in treats laden with butter and sugar since I don’t bake very often and feel like one real cookie satisfies my cravings more than several more healthy imitators. Apolinaras, on the other hand, is a health nut and is always trying to convince me to lighten things up. Unfortunately, this means I usually end up baking something only one of us actually enjoys. This needs to change! So, I decided to challenge myself this weekend and see if I could whip up a batch of muffins that weren’t completely bad for you that I would actually still gobble up with a smile.

I had a bunch of golden raisins left after making a Moroccan Beef Meatball Tagine from a recent issue of Bon Appetit, so I decided to center my muffins around them. Although applesauce is commonly added to low fat baked goods to keep them moist, I didn’t want to buy a jar just for one recipe, so I decided to puree a pear instead. In addition, I reduced the amount of sugar I normally use, used low fat sour cream and white whole wheat flour, and topped the muffins with an almond meal crumble topping. These muffins tasted like coffee cake AND Apolinaras wasn’t completely disgusted by the nutritional profile – problem solved! Well, for muffins at least…

Directions:
Preheat oven to 350˚F. Line a 12-cup muffin pan with cups. To make the crumble topping, mix the melted butter, brown sugar, and almond meal in a small bowl.

To make the muffins, pulse pears and sour cream in a food processor until smooth (I had 1 cup of liquid after pulsing); place in a large bowl and stir in butter, sugar, egg, and vanilla extract until smooth. Stir in flour, cinnamon, ginger, baking powder, baking soda, and salt. Stir in golden raisins.

Scoop muffin batter evenly into the 12 prepared muffin cups. Top muffins evenly with the crumble topping. Bake at 350˚F for 20 to 25 minutes or a toothpick inserted in the center of the cake comes out clean. Makes 12 muffins.

I’ve often wondered why I’ve never seen a layered coffee cake. It just seems like stacking coffee cakes on top of each other would make the presentation so much more festive! I recently couldn’t help but try out this idea when I was baking a birthday treat for us to...
Make this

My hubby and I shop for the majority of our groceries together on the weekends, but Apolinaras usually heads to the store by himself when we need something during the week. I try to help him out by structuring the list so it goes in order of the store aisles and...
Make this

I’ve been trying to work on clearing out the clutter from our pantry and recently found a lonely can of red bean paste hidden away in the very back corner. How did I forget about such a treasure? It jumped into our cart at HMart a few months ago, and I was originally...
Make this

Crisp air, gorgeous boots, warm layers, acorn and butternut squash, pumpkin spice lattes, and pumpkin beer all mean one thing – autumn is here! Fall has always been my favorite season for the aforementioned reasons and the fact that my birthday is in September and I...
Make this

My favorite dinner to make when I’m cooking dinner for one is breakfast. Apolinaras isn’t a huge fan, so I always jump at the chance to whip up a broccoli cheddar omelet, turkey bacon, and whole wheat toast with jam when he’s out of town or at one of his late night...
Make this

I hope everyone had a lovely Mother's Day celebration! My parents have made it a tradition to visit us in Boston over the holiday and this year the highlights were visiting Castle Island, attending a cookbook signing with my mom (more on this in a future post!), and...
Make this

I’ve gotten into the habit of buying one pound logs of goat cheese from Costco and since goat cheese goes bad faster than other varieties, I’m always trying to quickly use it in several different ways after opening the package – there’s nothing worse than wasting goat...
Make this

Apolinaras and I celebrated our 5 year wedding anniversary yesterday! I will restrain myself from being too mushy, but I will say I am thankful every day to be married to such incredible partner. He balances me out, reminds me what really matters, supports my...
Make this