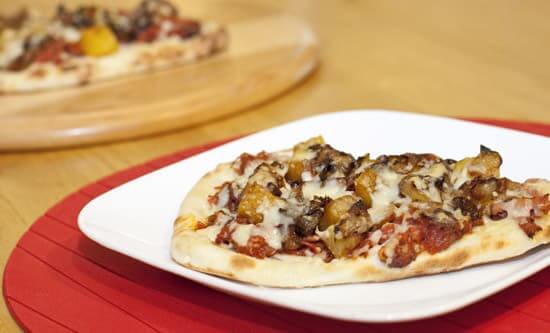 I hope everyone is enjoying the long holiday weekend! Apolinaras and I are celebrating our seventh wedding anniversary with a mini vacation in Portland, Maine, and the eats have been phenomenal so far. I’ll have a full recap soon! In the meantime, I thought sharing the recipe for these Caramelized Pineapple Pulled Pork Flatbreads would be the perfect way to usher in the summer.

I topped warm pieces of naan with BBQ pulled pork, caramelized onions and pineapple, and a touch of cheddar cheese. This is my version of a semi-homemade meal since I bought the smoked pulled pork from Costco and mixed it with a little jarred BBQ sauce. I also used frozen naan instead of making pizza dough. Of course, caramelizing the pineapple and onions takes a little bit of extra time, but I did this the night before so it the meal would come together quickly. I also actually caramelized several onions and a whole pineapple, so I had extra to use in other recipes like this one!

Directions:
Heat butter and olive oil over medium heat in a large nonstick skillet. Add onions, cover pan, and cook for 25 minutes, stirring every 5 minutes, or until onions are caramelized.

Meanwhile, heat over broiler. Place pineapple on a large cookie sheet and sprinkle brown sugar evenly on top. Broil for 5 minutes or until caramelized.

To assemble, top each piece of naan evenly with pulled pork. Sprinkle caramelized pineapple and onions on top. Sprinkle evenly with cheese. Place on a cookie sheet and broil for 2 minutes or until cheese is melted. Makes 4 servings.

Can you believe I never had mac & cheese growing up? I was actually first introduced to the blue box in college by my good friend Susie. We lived together the summer in between our sophomore and junior years and used to come home from our respective labs during...
Make this

Happy Halloween! We’re currently putting the final touches on Apolinaras’ costume and I’m hoping I can convince him to let me post a few pictures, but I don’t want to push my luck too much. I’m very excited that I even convinced him to dress up - this is only his...
Make this

I hope everyone had a great holiday weekend! Ours was very relaxing. I finally found our ice cream maker and whipped up a yummy strawberry-mango sorbet. We also had a date at Costco (Am I the only one that considers going to Costco together a date?), and came home...
Make this

So I finally got around to making plantain gnocchi again, but was so tired that I didn’t even make a sauce to go with them and just ended up topping them with some fresh tomatoes. They were still delicious though, mainly because they were stuffed with chunks of...
Make this

Apolinaras and I recently celebrated our eighth wedding anniversary with a trip to Martha’s Vineyard over Memorial Day weekend! I really can’t believe it’s already been eight years. It was our last vacation before the baby arrives, so there was nothing on our agenda...
Make this

So it’s official – I’m a triathlete! I finished my first sprint triathlon at the Cranberry Trifest yesterday. The race was a 0.5 mile pond swim, followed by a 11.5 mile bike ride, and 3.1 mile run. My official time was 1:28:00, which put me in the top fourth of my age...
Make this

Poor meatloaf. I think meatloaf tends to get a bad rap, but I will always have a soft spot for it because it was the first dish I ever made for Apolinaras. I was a baby of 22 and just starting to get comfortable in the kitchen when I invited him over for dinner. We’d...
Make this