Whenever I think of Cajun pasta, I think of Emeril. Remember when he was on the Food Network 24/7? I became a big fan of his after visiting his restaurant NOLA in New Orleans with my good college friends Susie and Britt over New Year’s 2002. I remember enjoying a spicy pasta with lots of fresh seafood. We even somehow got our picture taken with the chefs – check out my short hair! 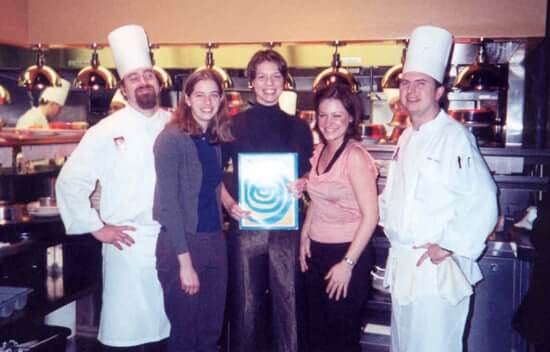 So, when I saw a contest on the Food Network site to win tickets to be in the audience of his show in NYC a few years later, you can bet I entered. I actually won the tickets and went with my mom and grandma, but to be honest, the show taping was a little disappointing. Instead of interacting with the audience during the time set aside for the commercial breaks, big security guards came in and surrounded the kitchen set so no one could get near him and we were never offered the opportunity to get our cookbooks signed. I’ve been to other show tapings where the opposite was true, but even though we didn’t have the best time, I still have enjoyed a bunch of Emeril’s recipes and would love to go to another one of his restaurants.

Anyway, I was recently inspired by Emeril when I decided to whip up a yummy Cajun shrimp pasta. I coated the shrimp with a spicy Cajun spice mixture and made a really easy creamy sauce with canned diced tomatoes, a little tangy goat cheese, cream cheese, and parmesan. And, to add an extra layer of flavor, I stirred in a touch of adobo sauce. This was easy and very tasty. 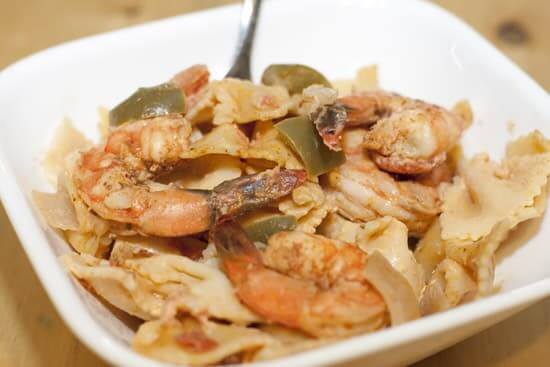 Directions:
To prepare the shrimp, mix the paprika, cayenne pepper, oregano, thyme, and salt in a medium bowl. Add shrimp to the bowl and mix well. Heat canola oil in a large nonstick skillet over medium high heat, place spiced shrimp in the pan, and cook for 2 to 3 minutes, stirring frequently, or until shrimp are cooked through and opaque. Remove shrimp from the skillet.

To make the pasta, prepare pasta according to the package directions, drain, and place in a large pot. Heat canola oil over medium high heat in a large nonstick pan and add onion and pepper. Sauté 5 to 7 minutes or until veggies are tender; add garlic and sauté 1 additional minute. Add diced tomatoes, cream cheese, goat cheese, parmesan cheese, adobo sauce, and salt to the pan and stir until all the cheeses have melted. Add the sauce and cooked shrimp to the pot with the cooked pasta and mix well. Makes 6 servings.

Apolinaras has quite the green thumb. Our apartment has a Juliet balcony, which is basically a huge sliding glass door that opens to umm, the bars of the balcony like this one. So as you can imagine, there's really not much room for plants, but Apolinaras is quite the...
Make this

Can you believe I never had mac & cheese growing up? I was actually first introduced to the blue box in college by my good friend Susie. We lived together the summer in between our sophomore and junior years and used to come home from our respective labs during...
Make this

So I finally got around to making plantain gnocchi again, but was so tired that I didn’t even make a sauce to go with them and just ended up topping them with some fresh tomatoes. They were still delicious though, mainly because they were stuffed with chunks of...
Make this

I’ve been looking forward to this week for awhile now, because I get to see my good friend Susie not once, but twice, in two different cities! Susie is one of my best friends from college. We initially bonded as partners in organic chemistry lab, where we amused...
Make this

I don’t usually buy a lot of produce at Costco, since it’s tough for just the two of us to eat our way through their large packages of fruits and veggies before it all spoils (although I do regularly make an exception of their Brussels sprouts and berries because we...
Make this

This pasta has Apolinaras’ name written all over it. I guess you could call him my muse from time to time. He looooves mushrooms and was so happy when I encouraged him to go ahead and put the pricey fresh shitakes in the grocery cart the other day. When I told him I...
Make this