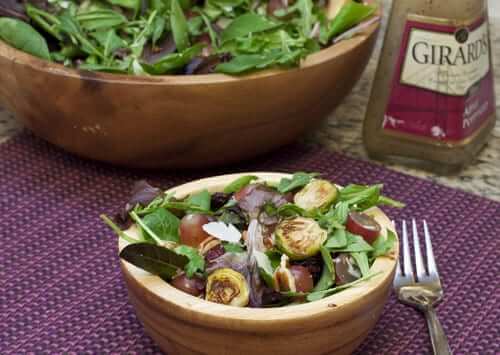 My lab headed over to Sweet Cheeks in Fenway to stuff ourselves with BBQ for lunch one day last week. The restaurant was recently opened by Tiffani Faison, who was a finalist on both Top Chef Season 1 and Top Chef All-Stars. You can probably guess that I was pretty excited to check it out!

Unfortunately, I was a bit disappointed with my pulled pork sandwich. The meat just wasn’t as tender and juicy as the pork at Blue Ribbon, and the sandwich was advertised as being served on Texas Toast, which I always thought was thick slices of garlic bread, but apparently is just normal slices of white bread? I did like that they had a couple different sauce options, and I will definitely be returning to see how Sweet Cheeks’ ribs and brisket stack up at some point. Their sides, however, blew Blue Ribbon’s out of the water. I wanted to dive into the mac & cheese, and my favorite part of the meal actually turned out to be their farm fresh salad. I know, I know, I was surprised too, who would expect a killer salad at a BBQ joint? The greens were tossed with hazelnuts, Brussels sprouts, and grapes, and the combo was perfectly balanced. It was so tasty that I decided I needed to make a salad featuring grapes and Brussels sprouts at home!

I mixed a large bunch of spinach and mixed spring greens in my salad bowl, along with roasted Brussels sprouts, halved grapes, dried cranberries, chopped pecans, and a healthy dose of shaved pecorino romano cheese. Then I took portions out throughout the week and dressed it with balsamic vinaigrette as I went along. I even caught Apolinaras dipping into the salad bowl a couple times – if that doesn’t indicate how delicious this is, I don’t know what does. Thanks to Sweet Cheeks for the inspiration!

My problem on weekends is that I tend to sleep in until after noon and then half the day is already gone! Plus, then I end up not being able to fall asleep until very late on Sunday night, which makes it hard to get up on Monday morning. But, I struggle to change this...
Make this

Thanksgiving is right around the corner and I’m so excited! I’ve never cooked for the holiday before and I can’t wait to finally take a stab at roasting a turkey. We bought all our groceries this weekend (except the turkey, which we’ll picking up Wednesday from this...
Make this

For a couple of years, I was in the habit of buying pre-washed salad mixes. You know, the kind that come in a bag or plastic box. This lead to the donation of our OXO salad spinner to the Good Will, because it was just sitting there collecting dust and taking up...
Make this

Time for our anniversary trip recap! Apolinaras and I got married over Memorial Day weekend in 2004 and we always try to take a little vacation over the holiday weekend to celebrate. This year we went to Portland, Maine, which is a super fun foodie destination right...
Make this

I recently checked out Upstairs on the Square with these lovely ladies and enjoyed a grilled halumi and fig salad nestled in a cornmeal crepe. I loved this combination of flavors and when I scored some fresh figs the other day at Costco, I immediately...
Make this

It’s been almost 10 months since I’ve entered a recipe contest, how sad is that? I tend to pick posting on my blog over entering contests, but I wish there were more hours in the day to do it all! I recently came across the Skinny Mama Cooking with Mustard Contest, a...
Make this

I recently noticed that while I've posted over 25 desserts, there's only one lonely salad hanging out in my recipe index. Aww, poor salad. It's funny because although I actually always enjoy digging into a lovely pile of greens at a restaurant, I’ve never quite gotten...
Make this