Pear Glazed Salmon with a Potato, Parsnip, and Bacon Hash 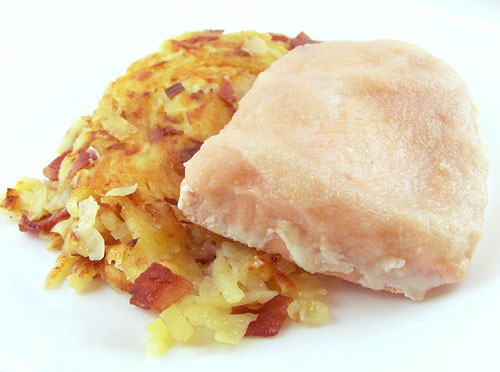 Some foods are so versatile that they are perfect for breakfast, lunch, or dinner. Bacon is definitely one of these ingredients, but I just realized that hash browns also fall into this category. Shreds of crispy golden brown fried potatoes just make everything better! I was recently spending a lazy Sunday morning trying to brainstorm a unique way to serve salmon, since we’ve in a bit of a rut with it, and realized over my omelet and coffee that I should try serving salmon with a breakfast twist – over hash browns!

The dish really came together wonderfully. I mixed turkey bacon and onions with shredded potatoes and parsnips and then fried them up in a bit of oil until they were golden brown. While the hash browns were cooking, I baked the salmon fillets, which were topped with a quick pear and ginger sauce. The sweet tender salmon was perfectly complemented by the savory crisp hash browns. Mmm, I’m definitely going to be making this again, but with a bit of fresh parsley on top for a touch of color!

Directions:
Preheat oven to 350˚F. Spray a large nonstick skillet with cooking spray and cook bacon over medium heat for 5 to 7 minutes or until crispy. Drain on paper towels.

Mix shredded potatoes, parsnips, onion, and 1 teaspoon salt in a large bowl; mix in cooked bacon. Heat 2 tablespoons canola oil over medium heat in a large nonstick skillet and evenly spread half the shredded potato mixture in the pan. Cook 14 to 18 minutes, turning once, or until hashbrowns are crispy. Repeat with remaining potatoes and 2 tablespoons oil.

Meanwhile, place pear, ginger, vinegar, and remaining 1/2 teaspoon salt in a food processor and pulse until well mixed. Evenly spread pear sauce over the salmon fillets and bake in a greased pan at 350˚F for 15 to 20 minutes or until cooked through. Serve salmon over the hashbrowns. Makes 4 servings.

Apolinaras kept popping his head in the kitchen last night while I was prepping dinner because he was so excited we were having salmon. Apparently he thought a little cheering from the sidelines would hurry things along because he kept doing little dances to amuse me....
Make this

This pasta has Apolinaras’ name written all over it. I guess you could call him my muse from time to time. He looooves mushrooms and was so happy when I encouraged him to go ahead and put the pricey fresh shitakes in the grocery cart the other day. When I told him I...
Make this

Apolinaras is like a kid in a candy store at any establishment that sells tools or hardware stuff. Now don’t get me wrong, I’m grateful he’s so handy and likes to do all the maintenance on our cars and tackle home improvement projects. But, the other weekend I was so...
Make this

We’re back! Our trip to Lithuania was amazing and I’m going to work on sorting through all our pictures this weekend so I can share a recap with you. There were two things I couldn’t wait to do once we returned home though – one was sleeping in our own bed because we...
Make this

Although I make vegetarian meals a couple times a week, it’s usually because I’m feeling too lazy to really cook. I often whip up simple meals like pizza, tofu fried rice, or breakfast for dinner when I’m super busy, but I rarely put extra effort into making really...
Make this

I think casseroles, like meatloaf, tend to get a bad rap, which is sad because not all casseroles contain “cream of whatever” soup - many are quite delicious! It’s been chilly, rainy, and depressing in Boston lately so I decided to cheer myself up by making a savory...
Make this