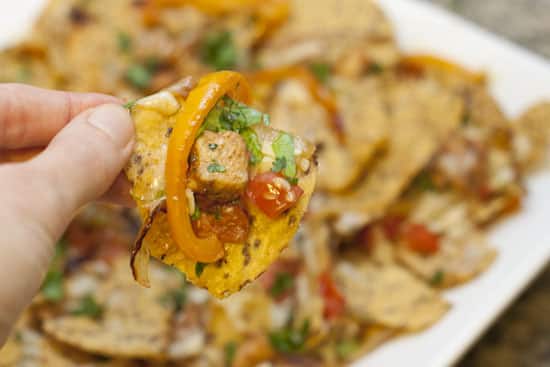 Apolinaras headed to the grocery store the other weekend and accidently brought home tortilla chips from Trader Joe’s instead of the tortillas on my list….oops. It was pretty obvious the only solution to this problem was to make chicken fajita nachos instead of chicken fajitas for dinner!

I layered tortilla chips with chicken spiced with cumin, chili powder, and paprika, and a healthy dose of onions, bright orange bell peppers, tomatoes, and sharp cheddar cheese. I broiled the nachos until the cheese melted and then sprinkled some cilantro on top – yum! The amount included in the recipe below is perfect for a party.

Directions:
To make the chicken, place cumin, chili powder, paprika, Mexican oregano, and salt in a small dish and mix well. Sprinkle spice rub evenly over chicken pieces and mix until well covered. Heat canola oil in a large nonstick skillet over medium high heat and sauté chicken for 5 to 7 minutes or until fully cooked and no longer pink in the center.

To make the nachos, heat oven broiler. Heat canola oil over medium heat in a large nonstick skillet and sauté bell pepper and onions for 7 to 10 minutes or until tender. To assemble the nachos, place half the tortilla chips on a large cookie sheet or oven-safe serving dish. Evenly top with have the onion/bell pepper mixture, tomatoes, and cheddar cheese. Layer the remaining tortilla chips on top, followed by the remaining onion/bell pepper mixture, tomatoes, and cheddar cheese. Broil for 3 to 5 minutes or until cheese is melted. Sprinkle evenly with cilantro and serve. Makes 10 servings.

I really enjoy every aspect of having friends over for dinner (except for the cleaning part, of course!) and was especially excited for the meal we had last night with our friends Geeti and Puneet because Geeti is also a huge foodie. We had an absolutely amazing feast...
Make this

I have a problem – I can’t stop stuffing things with cheese! I recently saw arancini (Italian rice balls) filled with cheese on Lisa is Cooking and Brown Eyed Baker, and immediately started drooling. Of course, I wanted to add my own little twist, so I drew...
Make this

You may have noticed I’ve posting less often than usual. I normally try to get about two recipes up per week, but between the exhaustion and nausea of the past several months, I just haven’t spent any time in the kitchen...yep, I’m pregnant!! Apolinaras and I are just...
Make this

We started our last day of our anniversary trip to Portland by indulging in a few sticky buns and croissants at the Standard Baking Company. Of course, we also filled up a bag with a few loaves of bread to bring home. The sourdough was excellent! Then we headed off to...
Make this

I was craving a nice light summer snack the other night while I was reading and really wanted to munch on some of these cucumber hummus appetizers. Unfortunately, there was no hummus in the fridge or chickpeas in the cupboard and I was about to make some boring old...
Make this

A couple months ago, Apolinaras and I spent a long weekend in Chicago. I was scheduled to give a seminar about my lab’s research at the AACR conference at McCormick center, and Apolinaras tagged along to keep me company. Apolinaras and I went to college and grad...
Make this

After submitting all my dessert recipes to the Pillsbury Bake-Off (please cross your fingers for me!), I had a few extra ingredients in the fridge to use - one package of pie crusts and one roll of cookie dough. I had developed so many sweet treats that I stuffed the...
Make this

As promised, here’s the recipe for the almond and red pepper stuffed mushrooms that we served at our URS screening party. I love stuffed mushrooms – they are one of the first apps I reach for at events and I’m always thinking about new ways to enjoy them. This...
Make this